How and Why Humor Differs Between the Sexes 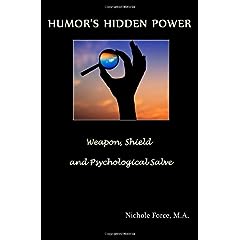 This article has been excerpted from the book Humor’s Hidden Power: Weapon, Shield and Psychological Salve, by Nichole Force, M.A.

Have you ever wondered why class clowns are virtually always male? Documented differences in the ways the genders use and respond to humor explain this and other humor-related phenomena.

For example, research conducted by psychology professor Robert R. Provine at the University of Maryland in 1996 found that women who posted personal ads sought a partner who could make them laugh twice as frequently as they offered to be the source of humor. Men, however, offered to be the provider of humor a third more than they sought it in a partner.

Psychologists Eric R. Bressler and Sigal Balshine found that men expressed no preference for funny women, but that women tended to choose funnier men as partners. Rod A. Martin of the University of Western Ontario elaborated on this discrepancy between the preferences of the sexes when he said, “Although both sexes say they want a sense of humor, in our research women interpreted this as ‘someone who makes me laugh,’ and men wanted ‘someone who laughs at my jokes.’”

Bressler, Balshine and Martin conducted research in 2006 in which they asked subjects to choose between pairs of potential partners for a one-night stand, a date, a short-term relationship, a long-term relationship or friendship. In each pair, one partner was described as receptive to humor but not funny themselves, and the other partner was described as very funny, but not interested in the humorous remarks of others. In all scenarios except friendship, men chose women who would laugh at their jokes while women selected men who would make them laugh.

Evolutionary psychologists have theorized that a sense of humor is a sign of intellect and strong genes and that women, the more selective sex due to the burdens associated with pregnancy, are attracted to funny men because of the genetic benefit that could be bestowed upon potential offspring.

Humor and creativity researcher Scott Barry Kaufman of New York University believes this process, known as sexual selection, explains why the use of humor is important in the initial stages of a relationship: “When you have little else to go on, a witty person who uses humor in a clever, original way is signaling quite a lot of information, including intelligence, creativity, and even aspects of their personality such as playfulness and openness to experience.”

An interesting study that examined the desirability of funny men to ovulating women was conducted in 2006 by Geoffrey Miller of the University of New Mexico and Martie Haselton of the University of California, Los Angeles. The researchers had female subjects read descriptions of poor but creative men and wealthy but uncreative men and rate each man’s desirability. Miller and Haselton found that during times of high fertility, women chose poor creative men twice as often as wealthy uncreative men for short-term relationships. No preference was found for long-term relationships, however.

In addition to the attraction women feel toward funny men, men find women more attractive when they laugh. This could be due to the fact that laughter signifies enjoyment and interest, or connection and understanding — all desirable qualities in a potential mate.

Psychology professor Robert R. Provine of the University of Maryland observed social interaction in various public urban spaces while studying spontaneous conversation in 1993, ultimately recording 1,200 “laugh episodes” (comments that elicit a laugh from the speaker or listener). In examining the episodes, he found that women laugh significantly more than men, and that both men and women laugh more at men than at women. Although men consistently garner the most laughs, research has repeatedly shown men and women to be equally funny when it comes to humor production.

Ph.D. student Kim Edwards of the University of Western Ontario arrived at this conclusion following a 2009 study in which men and women were rated on the funniness of captions they created for single-frame cartoons. Edwards found that both men and women created an equal number of highly rated captions. These findings indicate that the greater laughter garnered by men is more a consequence of social factors than a sign of a superior capacity for humor production.

Women and men also score very similarly on tests of humor appreciation. Psychiatrist Allan Reiss of Stanford University scanned the brains of male and female subjects while they rated the funniness of 30 cartoons. Both genders rated the same number of cartoons as funny and ranked them in the same order of funniness.

Men and women are both funny, but in different ways that the opposite gender sometimes finds unfunny. While women tend to share humorous stories and take a narrative approach, men more commonly use one-liners and engage in slapstick. There are, of course, exceptions to this generalization. Comics such as Sarah Silverman and Woody Allen cross over the gender lines a great deal, as do many men and women in society at large. Research has consistently indicated, however, that these trends exist. While women tend to use puns, self-deprecating humor and wordplay, men are more inclined to use physical and active humor.

In 1991 psychologist Mary Crawford of the University of Connecticut conducted surveys involving both genders and found that men favored slapstick humor, hostile jokes and more active humor while women preferred self-deprecating humor and sharing funny stories. Similarly, when Northwestern University psychologist Jennifer Hay taped group conversations in 2000, she found that men were more likely to tease and try to one-up in their use of humor with other men. They were found to tease significantly less, however, when in the presence of women, according to research conducted by Martin Lampert of Holy Names University and Susan Ervin-Tripp of the University of California, Berkeley. After analyzing 59 conversations, Lampert and Ervin-Tripp found that in mixed company women actually teased more than men, and directed their teasing toward the men. The women became less self-deprecating while the men laughed at themselves more — a kind of reversal of the typical gender-specific humor tendencies. The researchers concluded that men lighten up on the teasing with women out of a concern that it might repel them, while women become more assertive around men to counter feelings of vulnerability and to gain more equal footing with them.

Psychologists Karl Grammer and Irenaus Eibl-Eibesfeldt of the Ludwig Boltzmann Institute for Urban Ethology have demonstrated that laughter can be a very accurate source for determining the level of attraction between people. After studying mixed group conversations and the subjects’ level-of-attractiveness ratings, the researchers found that the amount of female laughter accurately predicted the level of attraction between both partners. A woman who laughs at a man’s jokes indicates an interest in him, and this indication of interest can spur even further interest on the part of the man.

As a relationship develops and humor becomes more about soothing each other and less about winning each other over, the typical gender roles in humor tend to reverse. Researchers have discovered that long-term relationships have a better chance of surviving if the woman is the one who is the primary producer of humor. Psychologists Catherine Cohan of Pennsylvania State University and Thomas Bradbury of the University of California, Los Angeles found that male humor can be harmful to relationships when they analyzed the marriages of 60 couples over an 18-month period. The use of humor by men during significant life stressors such as job loss or a death in the family was found to be associated with negative relationship outcomes. These couples experienced a greater incidence of divorce and separation than couples in which the woman reverted to humor under such circumstances. The researchers speculated that this may be a result of the more aggressive humor of males seeming inappropriate in stressful situations whereas the more soothing style of female humor serves to better bond partners during these times. It appears that male humor is better designed to win attention and affection, while female humor is better designed to maintain them.

Anthropologist Gil Greengross is known for his research into the role humor plays in flirtation and seduction. Of all the humor styles, self-deprecating humor was found to be perceived as the most attractive. Self-deprecating humor reduces tension and indicates a nonthreatening stance that puts others at ease. The opposite of self-deprecating humor, and therefore the most unattractive kind, is sarcasm or ridicule directed at others. Humor that comes at the expense of someone else’s feelings divides rather than bonds; and although it might elicit a laugh or two, the research indicates those laughs will not be there for long.

Humor plays a role in relationships from the initial flirtation through long-term commitment, and knowing the differences in how men and women process and use humor serves one well in all situations involving the opposite gender.

How and Why Humor Differs Between the Sexes

Nichole Force is the author of Humor’s Hidden Power: Weapon, Shield & Psychological Salve. She has a Master's Degree in Psychology from Loyola Marymount University, studied improvisational comedy at The Groundlings Theatre in Los Angeles and sketch comedy at the ACME Comedy Theatre in Hollywood. She is a researcher and writer on humor’s role in society and psychology.

APA Reference
Force, N. (2018). How and Why Humor Differs Between the Sexes. Psych Central. Retrieved on August 14, 2020, from https://psychcentral.com/lib/how-and-why-humor-differs-between-the-sexes/

Last updated: 8 Oct 2018 (Originally: 17 May 2016)
Last reviewed: By a member of our scientific advisory board on 8 Oct 2018
Published on Psych Central.com. All rights reserved.

How Feeling Not Good Enough Makes You Crave Validation

"I Think My Parent Is A Sociopath:" Cluster Traits & Behaviors

How to Stop Being So Controlling