Soldiers: The War Within

“Guilt is a part of the battlefield that often goes unrecognized,” writes Nancy Sherman, a professor at Georgetown University, in her book The Untold War: Inside the Hearts, Minds and Souls of Our Soldiers. But along with profound guilt comes a variety of emotions and moral issues that tug at soldiers, creating an inner war.

Sherman, who also served as the Inaugural Distinguished Chair in Ethics at the Naval Academy, delves into the emotional toll war takes on soldiers. Her book is based on her interviews with 40 soldiers. Most of the soldiers fought in Iraq and Afghanistan, while some fought in Vietnam and the World Wars.

She poignantly looks at their stories from the lens of philosophy and psychoanalysis, using these frameworks to better understand and analyze their words.

And so I have listened to soldiers with both a philosopher’s ear and a psychoanalyst’s ear. Soldiers are genuinely torn by the feelings of war — they desire raw revenge at times, though they wish they wanted a nobler justice; they feel pride and patriotism tinged with shame, complicity, betrayal and guilt. They worry if they have sullied themselves, if they love their war buddies more than their wives or husbands, if they can be honest with a generation of soldiers that follow. They want to feel whole, but they see in the mirror that an arm is missing, or having bagged their buddies’ body parts, they feel guilty for returning home intact.

In Chapter 4, “The Guilt They Carry,” Sherman reveals the various ways soldiers feel culpability. For instance, before their first deployment, soldiers worry about killing another human being. They worry how they’ll judge themselves or be judged by a higher power. Even if soldiers aren’t legally or even morally culpable, as Sherman writes, they still struggle with guilt.

This struggle can stem from accidental misfires that have killed soldiers or from minor but murky transgressions. One Army Major in charge of an infantry company in Iraq doesn’t go a day without thinking, at least in passing, about the young private who was killed when the gun from a Bradley Fighting Vehicle accidentally misfired. He still struggles with his “own personal guilt.”

A World War II veteran, who was part of the Normandy invasion, still feels uneasy about stripping their own dead soldiers, even though they were — understandably — taking their weapons. Another vet who served in the Canadian army in WWII wrote his family about the tension he felt eating German chickens. Yet another felt great guilt after seeing the wallet of a dead enemy soldier. It had contained family photos just like the American soldier had carried.

Soldiers also feel a kind of survival guilt, or what Sherman refers to as “luck guilt.” They feel guilty if they survive, and their fellow soldiers don’t. The phenomenon of survivor guilt is not new, but the term relatively is. It was first introduced in the psychiatric literature in 1961. It referred to the intense guilt Holocaust survivors felt — as though they were the “living dead,” as though their existence was a betrayal to the deceased. 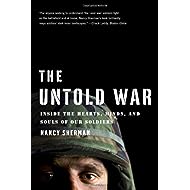 Being sent home while others are still on the frontlines is another source of guilt. Soldiers spoke with Sherman about “needing to return to their brothers and sisters in arms.” She described this guilt as “a kind of empathic distress for those still at war, mixed with a sense of solidarity and anxiety about betraying that solidarity.”

As a society, we typically worry that soldiers get desensitized to killing. While Sherman acknowledged that this might happen to some soldiers, this wasn’t what she heard in her interviews.

The soldiers with whom I have talked feel the tremendous weight of their actions and consequences. Sometimes they extend their responsibility and guilt beyond what is reasonably within their dominion: they are far more likely to say, “If only I hadn’t” or “If only I could have,” than “It’s not my fault” or simply leave things at “I did my best.”

Their guilty feelings often get mixed with shame. Sherman writes:

[The topic of guilt] is often the elephant in the room. And this is so, in part, because guilt feelings are often borne with shame. Shame, like guilt, is also directed inward. Its focus, unlike guilt, is not so much an action that harms others as on personal defects of character or status, often felt to be exposed before others and a matter of social discredit.

Sherman stresses the importance of having a society that understands and appreciates the inner war soldiers also fight. As she concludes in the Prologue:

Soldiers, both men and women, often keep their deepest struggles in waging war to themselves. But as a public, we, too, need to know how war feels, for war’s residue should not just be a soldier’s private burden. It ought to be something that we, who do not don the uniform, recognize and understand as well.

You can learn more about Nancy Sherman and her work at her website.

Soldiers: The War Within

Last updated: 8 Jul 2018 (Originally: 21 Jan 2012)
Last reviewed: By a member of our scientific advisory board on 8 Jul 2018
Published on Psych Central.com. All rights reserved.