First responders and veterans are similar in being willing to face danger in order to protect and save others. While they give their all, they are often wracked with feelings of guilt and powerlessness.

This is often because they demand themselves to be 100% successful 100% of the time, even when they cannot control 100% of the situation. You may have problems that stem from this kind of internal pressure as well. If you are a first responder, a veteran or the family member or friend of one, this section may have special meaning for you. If you are not in any of those categories, then this case may help you have a better understanding of — and compassion for — what our first responders and combat veterans are going through. In addition, if you have any of the symptoms listed here, it can help you learn something more about yourself.

Trauma can cause many physical disturbances and once it takes root, it usually doesn’t clear up on Its own. For people who have PTSD because they have chosen to serve their country in combat or as frontline responders, life can be especially hard, because they often develop feelings of failure. Most often, their symptoms aren’t being caused by fear for themselves, but because of the people they might have hurt — or who they couldn’t save. While the experiences that occur in war could be enough to have a negative impact on anyone, there can be additional reasons for breaching the emotional defenses of even the strongest warrior. The following example can give you an idea of how much suffering our combat veterans are experiencing — and how intricately woven our memory networks can be.

Hal Walters is a 37-year-old married, combat-decorated Marine Corps Staff Sergeant (SSCT E-6) with more than 11 years of active-duty service. His military primary care physician referred him for treatment due to postdeployment PTSD and major depression disorder symptoms. SSCT Walters related that within a week of returning home from his second and most recent combat tour in Iraq two years ago, he began to experience progressively worsening problems, along with daily intrusive recollections of combat-related events triggered by a wide range of common stimuli­ — such as the sight of older women, children, and crowded places.

His symptoms included insomnia, anxiety-related nightmares, inter­mittent crying jags, irritable and depressive moods, stomach problems, chronic fatigue, problems with concentration and memory, feeling socially disconnected, frequent headaches, periods of emotional numbing alternating with intense anger outbursts or seemingly unprovoked crying spells, hypervigilance (feeling tense and on guard), exaggerated startle (jumping at sudden noises), loss of appetite, feelings of exhaustion and profound guilt in relation to multiple war-related memories. All of these are symptoms — alone or in combination — that affect thousands of our warriors. Millions have been affected dating back to earliest recorded time.

Hal had a number of memories that needed to be processed, but one had extra special significance. He was on guard duty and his platoon was forced to open fire when a car barreled down on them. The disabled, smoke-filled, bullet-riddled car rolled to a stop. A few occupants slowly attempted to open the passenger doors. Exiting the rear door was an elderly Iraqi woman, who was mortally wounded and bleeding profusely. She cried out in obvious anguish and pain, as he and his men watched her collapse in spasms. As he told his therapist, other vehicle occupants were all badly shot-up and lay either dead or quietly dying. However, regulations did not permit the soldiers to approach until the explosive and ordnance disposal people had had a chance to inspect the car and ensure it was not a suicide bomb. The elderly Iraqi woman writhed on the ground and moaned loudly for what he reported seemed like hours, but lasted possibly only minutes until she eventually bled to death.

Hal’s facial and emotional expression changed dramatically while retelling the horrific incident. He lowered and shook his head in his trembling hands, as he tearfully recollected the ordeal that he reported reliving several times a day (and at night). Although he denied active suicidal thoughts, intense shame and guilt led him to question why he should continue to live. He frequently made references to the elderly nature of the female victim, so his therapist asked him whether she reminded him of anyone else he knew before. He appeared to carefully consider the question and initially answered “No.”

Then he quickly changed his mind, stating, “Come to think of it, she reminded me of my grandmother.” When asked how so, he replied, “My grandmother was from Nigeria, but lived with us for a few years when I was around eight.”

He paused and then continued. “But she and my mom constantly argued, I mean really argued. Then I remember one day my grandma told me she couldn’t live here anymore and was going to return to Africa.”

Hal’s therapist asked him whether she did indeed return to her home. He replied, “Yeah, she left almost the next day. I remember her crying when she said good-bye to me the day she flew back, and I never saw her again.”

“You never saw her again?” his therapist asked.

“Nope, she didn’t have a phone and couldn’t write and didn’t have e-mail. The last I heard about my grandma was about two years after she went home. My mom told me she had been diagnosed with cancer and died.” Hal lowered and shook his head. “I should have stopped her from leaving. If I had, she might still be alive.” When asked what he meant, he replied, “If her cancer was diagnosed here in the States, she could have gotten treatment here instead of Nigeria, which could have saved her life.”

He went on to express his guilt for not intervening between his mother and grandmother and preventing the rupture in the family ties. When asked how he thought his grandmother and the elderly Iraqi woman might be connected, he gazed ahead and said, “I never realized that before, but she was about the same age as my grandma, and in both cases I felt responsible for their deaths.”

Hal was asked to concentrate on the stomach sensations and to let his mind go back to the earliest time in his life where he felt those sensations along with feeling responsible or guilty about someone getting harmed. Almost immediately he recalled an outing with his younger brother when he was around six years old and his brother was four. They were walking on rocks near a pond when his brother slipped and hit his head. Hal’s hands began to tremble as he told about being “scared” and guilty as his brother cried out loudly with his face covered in blood. He ran home to get his father, who yelled at him and later beat him for not watching out for his brother. This memory and the one with his grandmother were processed to completion. He was able to recognize how young he had been, and that at six years old he had done his best by running for help. At eight years old, there was nothing he could have done to prevent his grandmother from leaving.

At that point the experience in Iraq was targeted and processed. At the end of the session the SUD was checked, and Hal registered a 1 rating. When asked what kept it from being a zero, he replied, “An innocent old woman died and it will never be a zero. Even though I know I had something to do with her death — I also know that we had no choice. All we saw was a car speeding right toward us that didn’t respond to our warnings. If we didn’t fire, a lot more people could have been killed. It’s one of those tragedies that isn’t right, but is a fact of war.” As I’ve said before, processing incorporates what’s useful and releases the rest. Veterans don’t lose their humanity or the “edge” they might need to survive. But they can let go of the pain of what they’ve been forced to do in situ­ ations they couldn’t control. 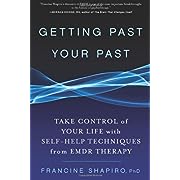 Another thing to remember is that we all have experiences in our childhood that can make us vulnerable to different kinds of problems. All it takes is some accumulation of later experiences to tip us over. These types of experiences are most notably found in wartime. In fact, the kinds of events that occur during war can be sufficient to deliver a body blow that becomes impossible to recover from alone. Combinations of fatigue, exertion, responsibility, relationships with those who have died, horrific images — the list goes on and on. Wrong time, wrong place, luck of the draw. Whatever the reason, the research is clear — after three months, PTSD is considered “chronic.” Symptoms can persist for life if they are left untreated. There can also be delayed reactions where years later something triggers the negative feelings or self-judgment. The bottom line is that the symptoms can emerge at any time. Our enlisted men and women may be returning home with visible or invisible wounds — and deserve our help, understanding and respect. Who among us could have withstood these experiences intact?

PTSD makes life unmanageable. It pushes people into trying to do something to survive the chaos within them. Some people turn to drugs or alcohol, which only makes matters worse. The people who come in for help should be honored for their bravery and willingness to confront their demons. Whether or not there are intrusive thoughts, nightmares or flashbacks of a specific event, if any of the symptoms that SSCT Walters had are part of your life, consider your options. You can keep trying to fight it alone or reach out for assistance, just as this veteran chose to do. You don’t have to talk about what happened in detail, and relief may be as quick as 12 sessions away. Please reach out for help.

The above is an excerpt from the book Getting Past Your Past: Take Control of Your Life with Self-Help Techniques from EMDR Therapy by Dr. Francine Shapiro. The above excerpt is a digitally scanned reproduction of text from print. Although this excerpt has been proofread, occasional errors may appear due to the scanning process. Please refer to the finished book for accuracy.

Dr. Francine Shapiro, author of Getting Past Your Past: Take Control of Your Life with Self-Help Techniques from EMDR Therapy, is a senior research fellow at the Mental Research Institute in Palo Alto, California, director of the EMDR Institute, and founder of the non-profit EMDR-Humanitarian Assistance Programs. As the originator of EMDR, she is a recipient of the International Sigmund Freud Award for Psychotherapy of the City of Vienna, the American Psychological Association Trauma Psychology Division Award for Outstanding Contributions to Practice in Trauma Psychology, and the Distinguished Scientific Achievement in Psychology Award, from the California Psychological Association. As a result of her work, over 70,000 clinicians have treated millions of people during the past 20 years. She is an invited speaker at psychology conferences and universities worldwide. For more information please visit www.drfrancineshapiro.com.

Last updated: 8 Oct 2018 (Originally: 17 May 2016)
Last reviewed: By a member of our scientific advisory board on 8 Oct 2018
Published on Psych Central.com. All rights reserved.

Why A Narcissist Plays the Victim: A Telltale Pattern