Falling Upward and Embracing the Second Half of Your Life

There comes a moment in every person’s life when she realizes she has just entered the second half of her life.

With the average lifespan of a woman in the United States being 81, I technically crossed that line three years ago. Yes, that’s when my waist disappeared and the pregnancy questions started; my squiggly gray hair came in and I purchased my first pair of readers; I started doing things like placing ketchup in the freezer and cereal in the refrigerator; and the medical appointments on my calendar started to outnumber the social gatherings by a ratio of about 10 to 1.

A month ago, I went through the rite of passage to the second half of life: my first colposcopy with an added bonus of an upper endoscopy. As I lay in the preparation room for this christening event, I read the book Falling Upward: A Spirituality for the Two Halves of Life by Richard Rohr. He writes:

There is much evidence on several levels that there are at least two major tasks to human life. The task is to build a strong “container” or identity; the second is to find the contents that the container was meant to hold. The first task we take for granted as the very purpose of life, which does not mean we do it well. The second task, I am told, is more encountered than sought; few arrive at it with much preplanning, purpose, or passion.

Father Rohr, a Franciscan priest and founder of the Center for Action and Contemplation, goes on to explain that rarely does a person want to enter this second phase of life. It’s usually thrust on you as a consequence of failure, embarrassment, or some kind of raw pain. When we are enjoying success, who really wants to look deeper? We literally fall into the latter task by shedding the goals, boundaries, and identities that seemed so critical to us for most of our lives, only to find out that they have nothing to do with who we really are. 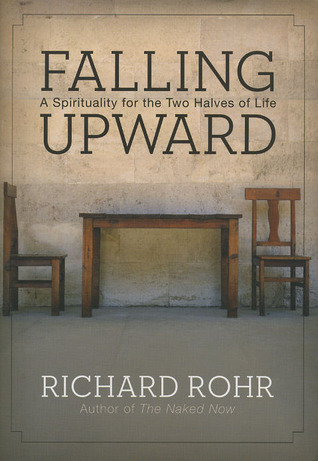 “It is when we begin to pay attention, and seek integrity precisely in the task within the task, that we begin to move from the first to the second half of our lives,” writes Fr. Rohr. Yes, that usually coincides with gray wisps and colonoscopies and readers hanging on your neck. But that’s only because the older we get, the better perspective we have on what really matters. Ironically, as our eyes fail, we begin to see life with much better vision.

But telling our egos that we no longer give a damn is an arduous task in our first-half culture where LinkedIn congratulates us a few times a day on being endorsed for skills we didn’t know we had. And in order to make it as a health columnist, you need to pretend you have your life together, touting 10 tips for practically everything from cutting up watermelon for your next neighborhood block party to rebalancing your gut bacteria. If you are truly a second-half person living out the wisdom of your hard-earned humility, you don’t need the noise of Twitter or to brag on Facebook.

In the half-hour I lay waiting for my colonoscopy, I realized that what has propelled me fully into the second half of life this year is a sequence of events much deeper than my gray hair, thick mid-section, and bad vision. What happened is precisely what Fr. Rohr describes: All of the institutions in which I sought safety and comfort and some kind of identity turned out to be mere containers, with no answers inside.

First, my husband confronted me about my health and said that the traditional psychiatric approach I had been taking — trying different medication combinations and psychotherapy — was obviously not working because I was still very depressed after four years. I began to think seriously about all my conditions (hypothyroidism, pituitary tumor, aortic valve regurgitation, digestive issues), and I realized I had been letting my specialists of the big medical institution I wanted to trust guide my health journey — and that we were merely doing circles in the dark. I was petrified that I would stay sick forever.

Then I became disillusioned with the publishing world after unsuccessfully fighting for my print and electronic rights back for my books Beyond Blue and The Pocket Therapist after they went out of print. Ever since I penned my first book in the fourth grade, How to Get to Heaven, I have always revered the publishing world, especially New York publishers, and wanted so desperately to be part of this prestigious industry. When I became a published author — and by a New York publishing house! — I attached too much of my identity into that. So when I observed the very ugly side of publishing the last few months, I was crushed. As a result, I never want to submit my intellectual property to a publisher again.

Finally, there was my näiveté about the nonprofit world. A year ago, I believed that all you needed was a noble dream in order to build a formidable foundation. Now, I know money and power dictate the land of do-gooders just as much as with corporations. Plus, you’re handcuffed by bureaucracy and politics. I suppose I expected to be refreshed from years of working as a government contractor, only to find my aspirations lost in a sea of red tape and aggravation.

“Where you stumble and fall, there you find pure gold,” said Jung.

When I looked closer at each of my failures, I realized how much my ego and a false sense of self were central to the containers I had built. All of these deaths were opportunities for the scared girl inside of me to shed her unnecessary attempts to prove that she was someone in this world — because she ultimately felt unlovable. Without a published book, or a doctor directing my next move, or a worthy nonprofit behind my name, who would I be? Only after identifying all my lame attempts at security and a sense of identity could I recognize my authentic self and my mission.

I didn’t need a New York publisher to help me disseminate my message and spread hope to the readers I write for. Why not self-publish my next manuscript? And instead of blindly following a bunch of physicians who subscribe to a medical model that no longer fits with my philosophies, what about beginning a new chapter on my health where I take the helm and guide my own course? How would that feel?

What we do in the second half of our lives is “shadow work,” according to Fr. Rohr. It is filled with humiliations: of books that don’t sell, of publishers who creatively interpret contracts, of infuriating diagnoses despite doing everything right, and of losing your good intentions in a heap of bureaucracy. The good news is that as we move deeper into our second half, we are no longer as humiliated by our let-downs. We come to expect various forms of illusions.

Most of us tend to think of the second half of life as largely about getting old, dealing with health issues, and letting go of our physical self, but [it] is exactly the opposite. What looks like onward, into a broader and deeper world, where the soul has found its fullness, is finally connected to the whole, and lives inside the Big Picture.

Blurry vision stinks, especially when your readers are in the freezer with the ketchup. And yes, some days I wish my hair would grow in blonde like it did at one point and I could get my waistline back. However, I’m much happier on this side of life, where there is less pressure to be someone I’m not.

Somewhere in all my disappointments this year, I crossed over to freedom.

I fell upward and embraced the second half of my life.

Continue the discussion on Project Hope & Beyond, my one simple initiative.

Falling Upward and Embracing the Second Half of Your Life

APA Reference
Borchard, T. (2018). Falling Upward and Embracing the Second Half of Your Life. Psych Central. Retrieved on August 8, 2020, from https://psychcentral.com/blog/falling-upward-and-embracing-the-second-half-of-your-life/

Last updated: 8 Jul 2018 (Originally: 24 Aug 2016)
Last reviewed: By a member of our scientific advisory board on 8 Jul 2018
Published on Psych Central.com. All rights reserved.