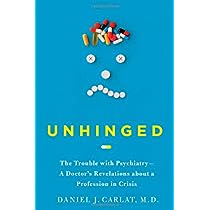 Perhaps you missed it, but psychiatrist Dr. Daniel Carlat released his first mainstream book in May criticizing the profession of psychiatry entitled, Unhinged. I’ve read it, enjoyed it, and would recommend it to anyone who wants to get a good understanding of how mainstream psychiatry is practiced throughout the U.S. today. Psychiatrists spend most of their time listening briefly to their patients, checking on how they’re doing on their medications, and send patients on their way, typically after only 10 or 15 minutes every few weeks. Psychotherapy is mostly done by psychologists and other mental health professionals.

If you’ve followed the mental health profession for the past decade — and especially with the nonstop disclosures of a number of company’s unethical practices of ghostwriting and such over the past 5 years — much of this is probably not new to you. But since most people don’t have that great an interest in the details of a profession (and its dirty laundry — keeping in mind all professions have dirty laundry), I think this book will be eye-opening for most people who pick it up.

Dr. Carlat has been doing the typical book promotional efforts, which recently included an interview on National Public Radio’s (NPR’s) Fresh Air program. While covering much the same ground as in the book, this may be the first time some have encountered Carlat’s wonderfully honest take on his own profession. It caught the ear of Giovanna Pompele, who wrote this response to what she heard during the interview over on Beyond Meds.

Unlike the audio interview, some of Carlat’s statements have been transcribed in the linked blog entry, which makes it easier to follow and read his arguments (but they may also be taken out of context, since you’re relying on the author to ensure proper and appropriate context is being provided).

On Carlat’s own blog entry, a lively discussion has ensued, and I encourage you to check it out and contribute your own thoughts to what he has to say, both in the interview, and even in his book.

My own perspective is that Carlat hasn’t said anything in the book that he hasn’t already previously said on his blog, or that others haven’t noted somewhere on the Internet. What Carlat has done is made his observations far more accessible and coherent in book form, meaning this information will be read and seen by more people than before. Since I’m a big believer in information and education — even when the information we’re getting is a little bewildering or unbelievable — I think Carlat’s efforts are noteworthy. I believe the entire mental health profession needs a similar wake-up call to what Carlat is trying to provide to psychiatry. Let’s hope someone is listening.

Beyond Meds’ reaction to the interview: Daniel Carlat MD on Fresh Air — discussed by Giovanna Pompele

Last updated: 8 Jul 2018 (Originally: 24 Jul 2010)
Last reviewed: By a member of our scientific advisory board on 8 Jul 2018
Published on Psych Central.com. All rights reserved.