Caregiving: Taking Care of Your Spouse & Yourself

Diana Denholm can relate to the challenges of being a caregiver. A month after her husband proposed, he was diagnosed with colon cancer.

While he survived the cancer, he was later diagnosed with congestive heart failure. Even after receiving a heart transplant, her husband continued to deteriorate and develop other conditions, including severe osteoarthritis, skin cancer, kidney failure, depression and Parkinson’s disease. Denholm was her husband’s primary caregiver for over a decade.

Even though Denholm, Ph.D, LMHC, is a medical psychotherapist, she felt incredibly unprepared for her role and found little direction for navigating the many stresses and challenges of being a caregiver.

This inspired her to write the book The Caregiving Wife’s Handbook: Caring for Your Seriously Ill Husband, Caring for Yourself, which gives women the practical tools to traverse their day-to-day lives and communicate with their husbands.

Denholm writes honestly about the realities and roller-coaster ups and downs of caregiving. She says what most caregivers know: It can be an ugly experience. Caregivers often do everything from dressing wounds to changing catheter bags; they experience resentment and may lash out at their sick spouse; and they can turn to unhealthy coping behaviors such as alcohol and substance abuse.

Denholm wants caregivers to know that while your marriage and life will change, they’re not over, even though it may seem like it. The best ways to circumvent the pressure of caregiving are to prepare yourself and continuously communicate with your spouse. Below you’ll learn more about effective communication and other key considerations of caregiving.

Emotions are another big stressor for caregivers, Denholm said. Caregivers often feel angry for a number of reasons. Their lives have changed, they’re stressed and they can’t fix their spouses. They may be angry that their spouse is responsible for the illness, whether directly or indirectly, and still won’t do what they need to for their health and well-being.

In the book, Denholm includes a helpful exercise for processing and releasing anger called “The Boulder Activity.” Sit in a comfortable position, and take a few slow, deep breaths. Pretend you’re in the woods in a beautiful setting, and come across a large boulder. It represents something that either annoys or angers you, such as something you or someone has said or done, or an event or situation. (According to Denholm, it’s never a person, including yourself, because you never want to send negative energy to anyone.)

Next to the boulder is a sledgehammer, which you pick up. Use the sledgehammer to hit the boulder. (“You’re not going to try to break up the boulder or even break pieces off it, because you can’t change what has happened. However, you can unstuff your emotions.”) As you strike the boulder, be specific about why you’re upset. Name the issue in detail in your mind, so you can remove your anger.

Self-care is the most difficult thing for caregivers, Denholm said. Caregivers know what they need to do but rarely feel like they have the time or energy. But the biggest hurdle is permission to practice self-care, she said. Caregivers worry that enjoying themselves is a betrayal of their sick spouses. Denholm summed up the issue in the following question: “What kind of a terrible wife am I that I’m at a yoga class while my husband is in bed suffering?”

If guilt is an obstacle to self-care, harness these feelings. Denholm suggested thinking of self-care as a way to sustain your well-being for your spouse. If you’re exhausted and emotionally drained, you can’t take care of anyone. 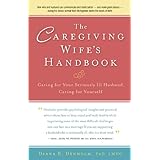 If time is an issue, avoid taking on all the responsibilities and micromanaging, she said. In fact, doing everything for your spouse is a bad idea in the first place. Not only do you become exhausted, frustrated and resentful, but you turn your spouse into an invalid, she said.

While it might not feel like it, remember that as a caregiver, you do have choices, Denholm said. You have choices about the roles you take on and the ones you don’t.

Learn more about Diana Denholm and her work at her website.

Caregiving: Taking Care of Your Spouse & Yourself

APA Reference
Tartakovsky, M. (2018). Caregiving: Taking Care of Your Spouse & Yourself. Psych Central. Retrieved on May 25, 2020, from https://psychcentral.com/blog/caregiving-taking-care-of-your-spouse-yourself/

Last updated: 8 Jul 2018 (Originally: 8 Mar 2012)
Last reviewed: By a member of our scientific advisory board on 8 Jul 2018
Published on Psych Central.com. All rights reserved.

The #1 Myth About Psychopaths and Malignant Narcissists: What People Get Wrong About These Types

Not All Childhood Emotional Neglect is the Same: 5 Different Varieties

How the 8th Sense Affects a Child's Emotional Experiences

How to Successfully Work with a Narcissist