I first learned about the (even greater than among white folks) stigma of mental illness in the Black community when I participated in a six-week outpatient program at Laurel Hospital. Half the group was African American, and I got to hear their stories, which horrified me. Most of them could not reveal to any member in their family what they were doing (the outpatient program) because the stigma is so deep and tall and wide.

My heart went out to them. Without support from the community, or at least family and friends, how does a person recover?

So I was delighted to hear bestselling author and licensed social worker Terri M. Williams speak at the Mental Health America this summer. She inscribed for me a copy of her evocative and insightful book Black Pain: It Just Looks Like We’re Not Hurting, with these words: “Be bold and courageous on the journey. Stay strong and God bless.”

I wish you all those same exact words.

On Terrie’s amazon page, I found a powerful video about her ministry.

Here’s a peak inside Terri’s book…

I am a women on fire.

I have two favorite pictures of myself as a little girl. One is of me at age three, naked except for my panties, standing on a large pillow, with a huge smile and my arms flung out wide. The other is of me about a year later dressed as Queen Esther from the Bible for a nursery school play. For the past year, almost fifty years later, I am more like the child in those pictures than I have ever been.

For much of my career I have spoken to diverse groups of thousands of people around the country about achieving success in business and in the field of public relations. In the last two years, I’ve begun dealing with major depression in my life, and when I give talks now, they’re less about business than they are about this misunderstood disease. First I talk about how depression almost killed me; in other words, I stand in front of audiences of hundreds of people, naked and transparent, with my arms flung open. Then I talk about depression and Black people–how it is crushing our youth and destroying lives–those who suffer from depression along with those who care about them. It is then that I think of Queen Esther, because she was called upon to reveal herself to save the lives of her people, AND SHE WAS SCARED TO DO IT, but she couldn’t stand to watch her people be destroyed–she had to save them. I think of Queen Esther because depression is killing Black people by the thousands, and I have to talk about it no matter how much it scares me… 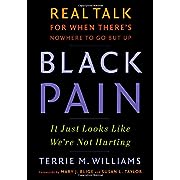 I had spent my whole life helping other people, but for the first time I truly understood that I can’t help others without helping myself. So I keep working on myself, trying to give myself the kind of attention and care I give to other people. But as essential as self-care is, it’s not enough for me. As I understand my own depression, I realize that I am in a unique position to investigate the face of depression in Black America, the pain that keeps so many of us locked in unnecessary despair and isolation. Maybe we can’t cure depression, but I in the first decade of the twenty-first century we can certainly treat it.

Depression is a fact of Black life, but it doesn’t have to be a curse. And we don’t have to be ashamed to admit it. This book will speak openly about my own depression and share the experiences of other people, from celebrities to regular working folks, so that we can think in different ways about this condition–and about our options as Black people for dealing with it. More than anything, I was to open a dialogue. I want to give a voice to our pain and name it so we can make a space for our healing.

Whenever I start to feel overwhelmed by this challenge I’ve taken on, this responsibility I’ve been given, I look at that childhood photograph of me as Esther. I remind myself that when Esther became queen, she thought things would be smooth from there on in–she didn’t know she’d be called upon to reveal her Jewish heritage and sacrifice her own comfort to save her people. Once she decided to do it, though, she understood that she was not burdened with responsibility, but blessed with the opportunity to help the people she loved. I am inspired by Esther–the queen in the Bible and myself as a little kid. I WILL talk about depression because my people are dying. I love my people and I will not stop talking about it and I will not rest until we can freely speak our pain without shame, because I am a woman on fire.

Last updated: 8 Jul 2018 (Originally: 8 Oct 2010)
Last reviewed: By a member of our scientific advisory board on 8 Jul 2018
Published on Psych Central.com. All rights reserved.