6 Ways to Slow Down and Save Time

Moving by the seat of our pants isn’t that helpful for efficiency. For one, rushing can mean making silly but time-consuming mistakes, like misplacing important items, locking your keys inside the house or glossing over errors at work.

And we might miss out on life altogether. “When things go too fast, we aren’t cognitively able to process the information, so a lot of our lives literally whizzes by,” according to Christine Louise Hohlbaum, author of The Power of Slow: 101 Ways to Save Time in Our 24/7.

Below, Hohlbaum shares several helpful tips on slowing down and saving time.

My idea of fast and furious is probably a day at the beach for anyone in NYC. (I know this because my friends in NYC tell me regularly.) But that’s OK. This is where your custom speed comes in.

“When you live at your own speed, you absorb experiences more fully,” according to Hohlbaum.

Keep in mind that your ideal speed will vary, depending on the season and the time of day, Hohlbaum added.

Hohlbaum suggested looking at your days like a puzzle. “Segment each piece into bite-size chunks,” she said. For instance, your segments might include household chores, creative work and bill-paying. Try to work on each segment separately, and avoid multi-tasking.

Hohlbaum has a helpful exercise for segmenting your schedule. You’ll need a whiteboard, index cards, a pen and magnets. Write down your priorities on the index cards. Tape a magnet to each card, and place the cards vertically on a whiteboard. Put the most important priority on top. Once you’ve accomplished that segment, move it to the bottom, and so on.

“[This activity] helps you visualize your day, makes it more manageable and gives you a semblance of control,” Hohlbaum said. “It’s also great to know that priorities can shift, as easily as magnets on a board, and that sometimes you need to be flexible in the face of change.”

3. Say no and set boundaries.

Hohlbaum suggested creating boundaries around your availability. As she explained, that includes “letting things go to voicemail, not answering text or instant messages when you’re busy or turning off your cell phone altogether for stretches of time.”

Saying no also is important for preserving boundaries. If saying no is excruciating for you, just remember that extra commitments only take time away from what’s truly important to you. The key is to say no and move on, without naming excuses, Holbaum said.

“Most of the time people ask you to do things because they think you are competent.” (Or they don’t want to do it themselves.) “But in my book, just because you can, doesn’t mean you have to,” she said.

“You don’t have to run a one-person show all the time,” Hohlbaum said. Accept help from others, or hire help if you can. Delegating helps you attend to the more meaningful things in your life — and have the energy for it. 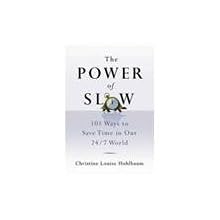 Rushing can rob you of much-needed setup time. When you start a household or work project, it’s important to make sure that you have everything you need.

Say you’re renovating your home. “It’s much smarter to ensure you have all your supplies first before getting started only to realize you’re out of something, have to stop what you’re doing and go to the store — or worse, to discover the store is closed,” Hohlbaum said.

6. Think before you speak.

Another con of rushing?  Careless communication, according to Hohlbaum. “Careless communication can be extremely time-consuming as you have to then clean up what you could have avoided had you been clear the first time around,” she said. So, before sending an email, ask yourself: “How would I react to this message?”

“We all have 24 hours a day. It’s not the time that matters as much as the things you choose to do in the time that you have,” Hohlbaum said.

6 Ways to Slow Down and Save Time

APA Reference
Tartakovsky, M. (2018). 6 Ways to Slow Down and Save Time. Psych Central. Retrieved on January 25, 2020, from https://psychcentral.com/blog/6-ways-to-slow-down-and-save-time/

Last updated: 8 Jul 2018 (Originally: 27 Mar 2012)
Last reviewed: By a member of our scientific advisory board on 8 Jul 2018
Published on Psych Central.com. All rights reserved.

The Narcissistic Mother: One of the Most Frightening of All Personalities

Ghosting, Catfishing, Benchwarming and Breadcrumming: Terminology of the Dating World

The Need to Please: The Psychology of People-Pleasing